In Thailand, people in general greet one another with the word Sawatdi. This word can be used at all times of day. A male would add the word khrap and a female the word kha after Sawatdi to show politeness. The word Sawatdi can also be used when taking leave of someone or saying good-bye.
If the persons are friends or about the same age, the word Sawatdi alone is sufficient for greeting. A wai is a gesture of pressing the palms together in the position of a budding lotus at chest level, with the fingertips touching the tip of the nose. There are three levels of wai. 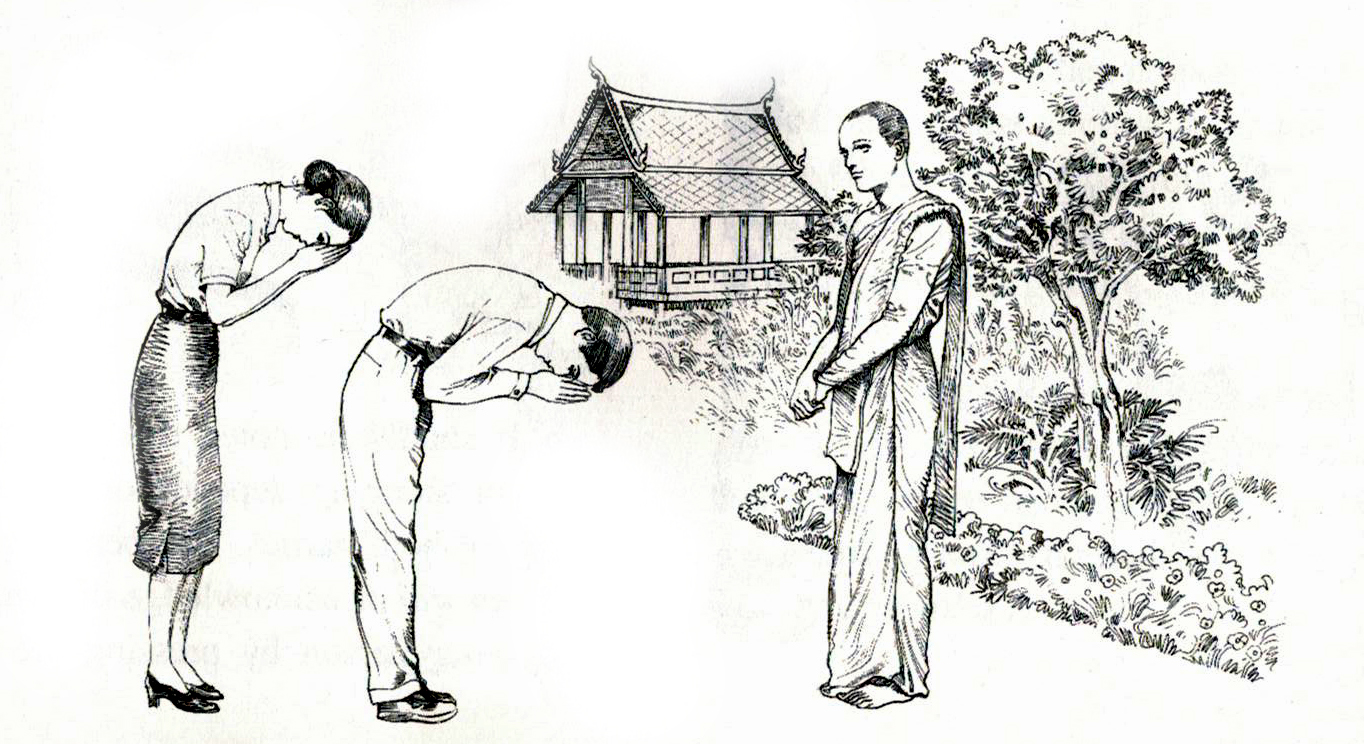 1. For the Buddha images or the monks only:
Raise the pressed palms until the thumbs touch the space between the eyebrows and the fingertips touch the hairline at the forehead. The tips of tbe index fingers are pressed against the forehead, not tilting to the left or right. This is the 1st level wai. 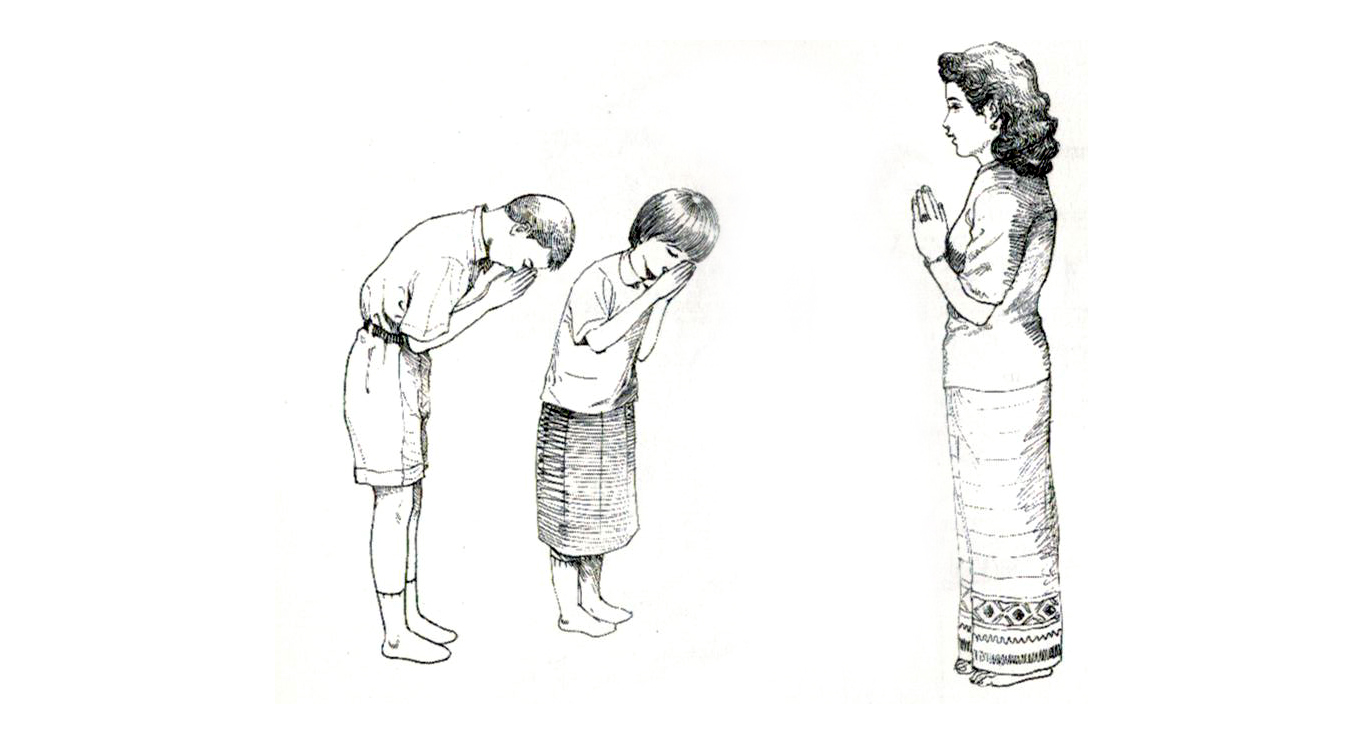 2. For parents, teachers, senior relatives, and the elderly:
Raise the pressed palms until the thumbs touch the tip of the nose and the fingertips touch the space between the eyebrows. This is the 2nd level wai. 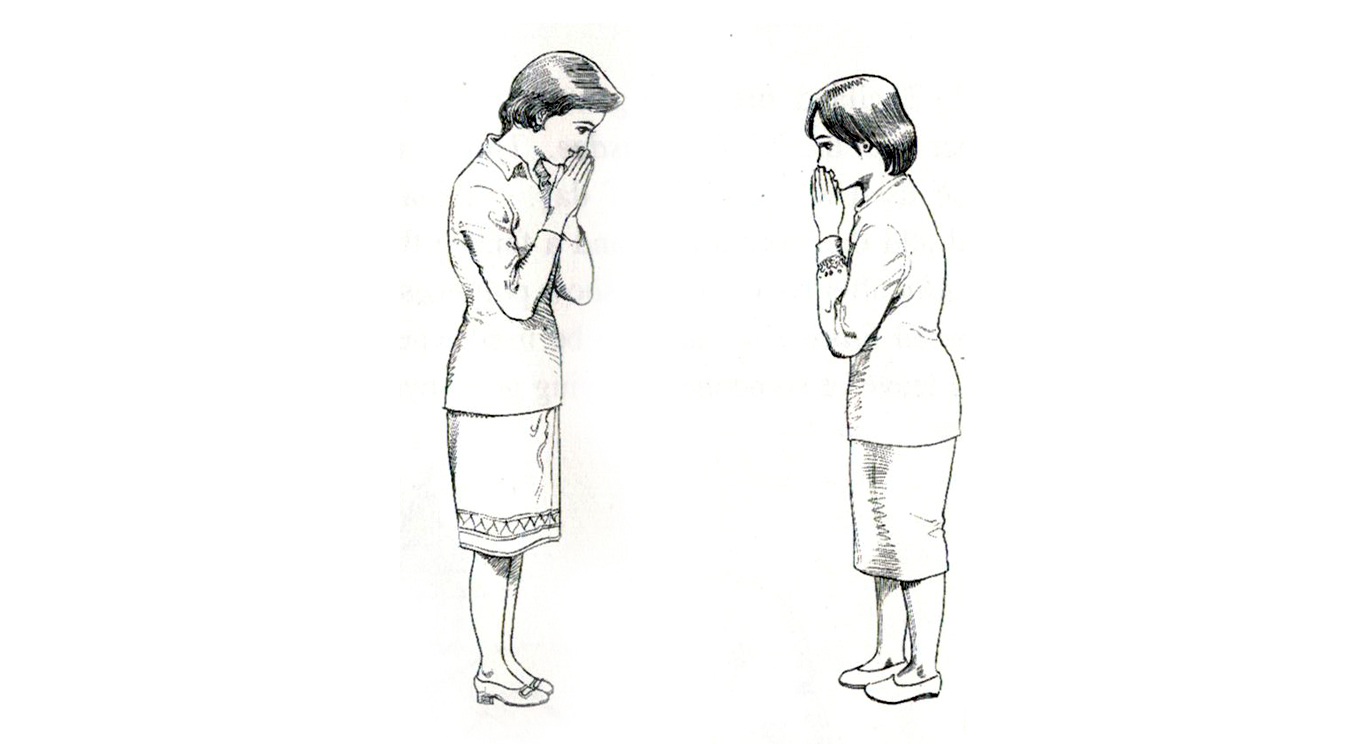 3. For respected persons in general including persons of the same status:
Let the pressed palms touch the lower part of the face, with the tips of the thumbs touching the tip of the chin and tile tips of the index fingers touching the nose. Bow the head a little without stooping for both male and female. This is the 3rd level wai.
It should be noted that the level of bowing or stooping depends on status and seniority of both parties. The person greeted should rap wai or acknowledge the wai from a less senior person by pressing the palms together at chest level with the fingertips at the chin, head bowing a little. The rap wai should generally be performed as a gesture of mutual respect. 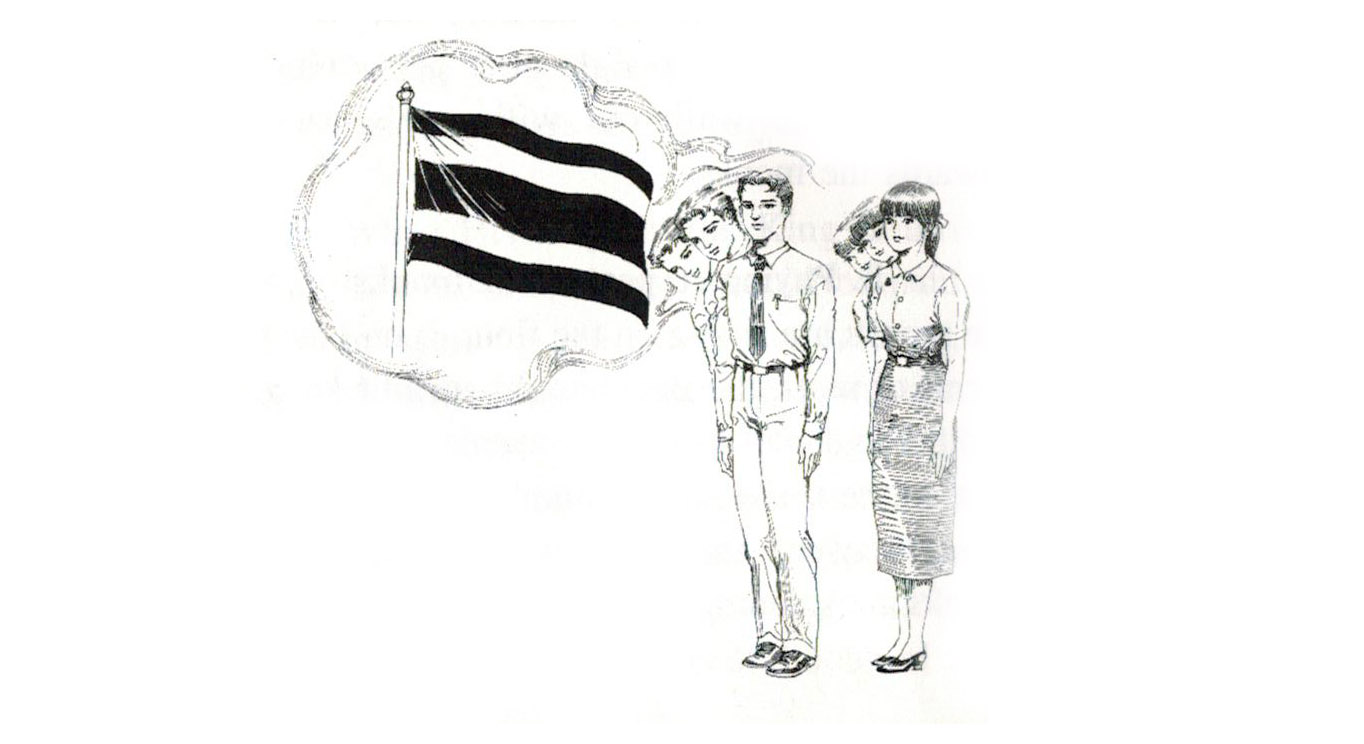 There are three institutions that the Thai people regard highly and must therefore pay proper respect. 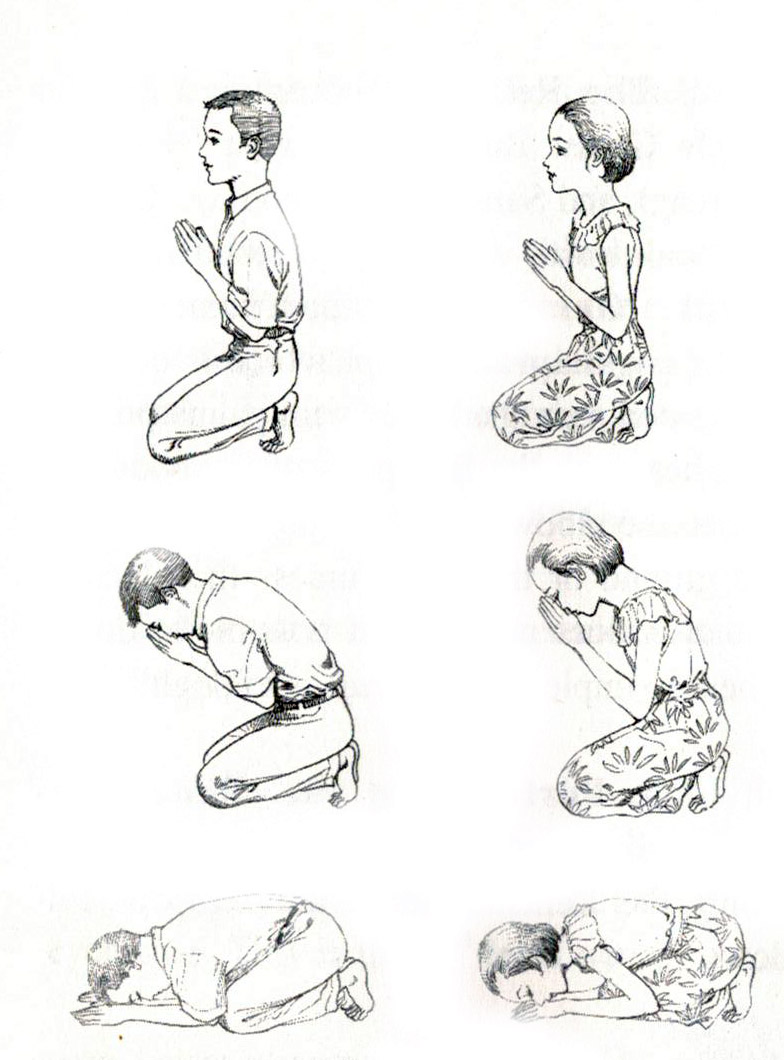 2. The Religion
Represented by the Triple Gems: Buddha, Dharma (Buddha’s teaching), and Sangkha (the monks). Usually the traditional way to pay respect to the Triple Gems is by performing the Benchangkhapradit krap, which is done by going down on the knees with palms pressed together, with the five parts of the body: the knees, the elbows, and the forehead touching the ground or the floor, unless the place or situation does not make it possible to do so. Then a simple wai or krap is enough.
I. Performing the Benchangkhapradit krap– There are three steps in doing the Benchangkhapradit krap as follows.
1st step: When properly seated, press the palms together at chest level with the tips of the fingers about 450 from the chest. The arms should not be too far away or too close to the body. This gesture is called anchuli.
2nd step: Raise the pressed palms and bow the head a little to allow the thumbs to touch the space between the brows and the fingertips to touch the hairline. Tills gesture is called wantha.
3rd step: Prostrating, for a male this is done by bowing and letting the hands and arms touch the floor. When the hands are laid bare on the floor, the thumbs should be about one khuep (measurement from the tip of the thumb to the tip of the middle finger when the hand is fully spread out) apart, leaving some space for the forehead to touch the floor. Both elbows should be placed next to the knees. A female should do the same except that the elbows can be placed on the knees, not next to them. This gesture is called krap.
The Benchangkhapradit krap should be done slowly three times. After that go back to the wantha gesture one more time and then lower the hands to signify that the krap is over.
The Benchangkhapradit krap is used to pay respect to both the Buddha images and the monks. Take notice whether one should crawl on the knees or walk in at a proper distance before sitting down to perform the krap. After it is done, one should crawl back on the knees at a suitable distance before standing up and backing out. It is improper to stand up right after performing the krap and walk out with one’s back towards the monks.

II. Paying respect to the monks – If the monks are sitting on the floor or on other forms of seats, the Benchangkhapradit krap should be done. If it is inconvenient to do so just do the wai with the thumbs touching the space between the eyebrows. In case the monks are standing or walking past, just do a wai. lngood taste, shoes should be removed before paying the monks the krap or wai.
When a monk is delivering a sermon, respect should be paid to the Dharma by keeping the palms pressed at chest level during that time. When the preaching is over, raise the hands until the tips of the thumbs touch the space between the eyebrows and let out the word sathu. When having a conversation with a monk, always keep palms pressed at chest level all the time whether standing or sitting, no matter whether the monk is less senior than the person. Status of the monks should not be taken into consideration. The monks with proper observance of religious precepts and morals all deserve respect regardless of their seniority. 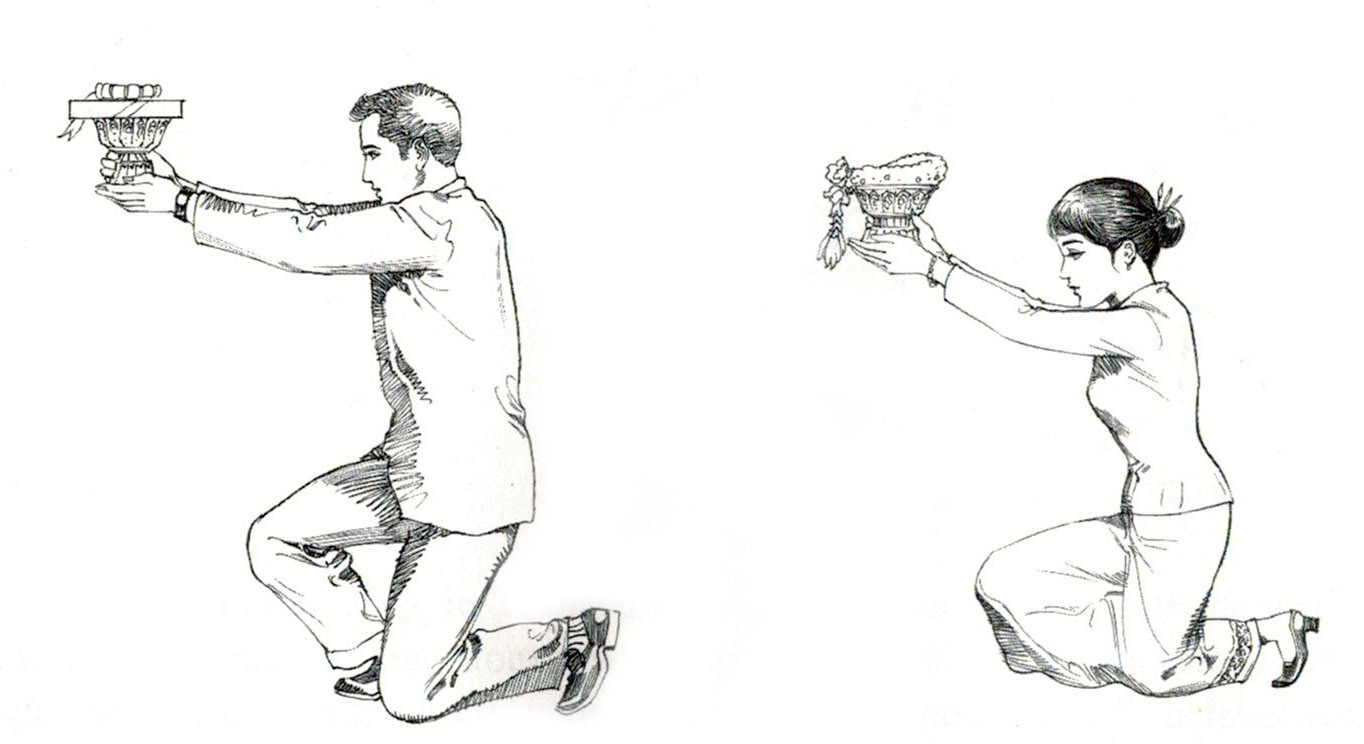 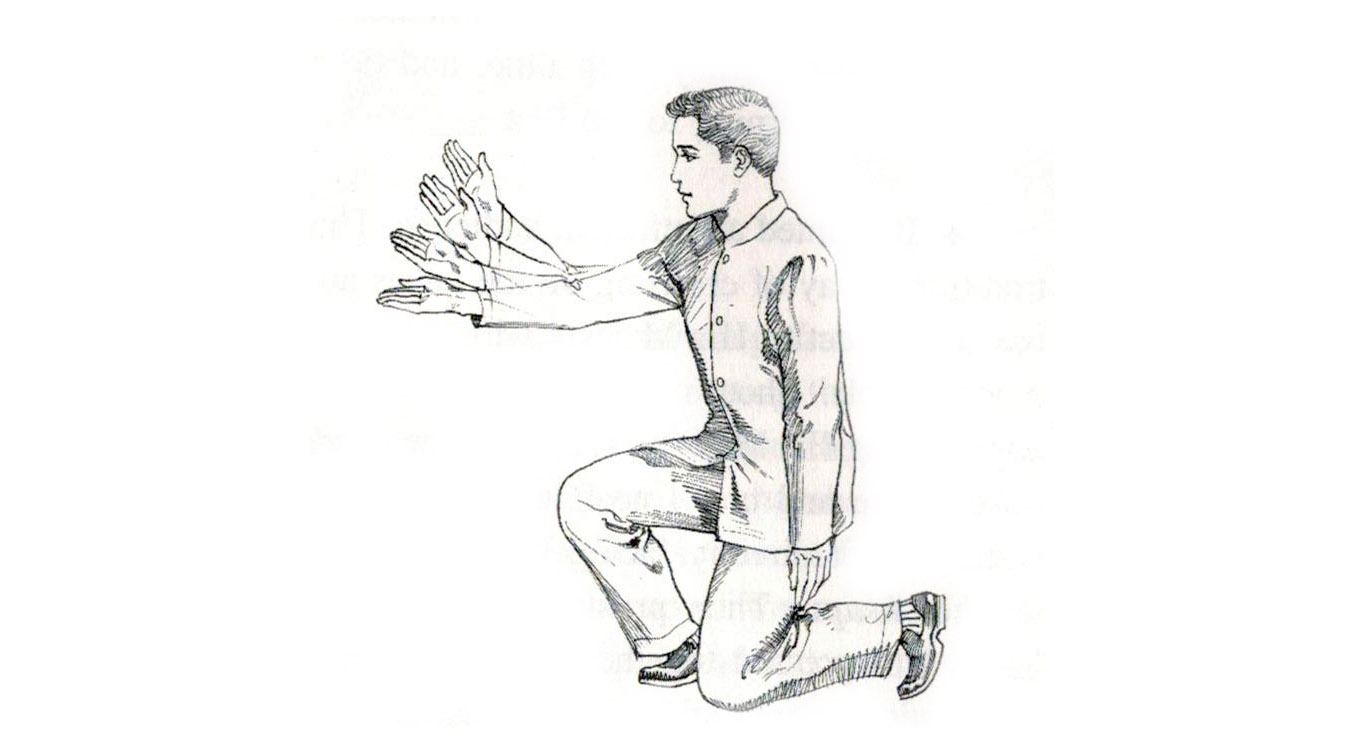 3. The Monarchy, represented by the King and members of the Royal Family.
When His Majesty the King is travelling in a vehicle, respect should be paid to him by standing and bowing, or saluting, or paying him a krap or wai, as the situation or circumstance may allow. If he is walking along the carpeted path, people should stand properly and pay him respect. If His Majesty addresses someone, that person should keep his pressed palms between the chest and answer him, paying him another respect after he has moved away.
At a formal function where people are seated or standing in the King’s audience, everyone must rise when His Majesty walks past, paying respect to him with a bow or a curtsy. When the King’s Anthem is played, remain standing until it is over, then make another bow or curtsy before sitting down. Before His Majesty takes his seat, the audience must bow or curtsy once and remain standing until he is properly seated, then make another how or curtsy before sitting down politely. If it is necessary for one to leave his/her seat in the King’s audience, make a bow or curtsy each time, and do it again when returning to the seat.
If granted an informal audience, Thai traditional way of crawling on the knees and paying respect to His Majesty with a krap is more suitable. Shoes must not be worn. When approaching His Majesty, krap with the hands raised once and crawl near him at a proper distance, not directly facing him, and make another krap. Then prostrate oneself with hands still pressed together. If His Majesty addresses someone, the person must look up and answer him. When leaving His Majesty’s audience, krap with the hands raised once and crawl backward at a proper distance. Make another krap before standing up.
When being bestowed something by His Majesty in a formal ceremony, bow or curtsy and approach him at a proper distance, then bow or curtsy one more time. Then bend the left knee and raise the right hand to do the ao ngan, an ancient custom of paying respect to show that one was not carrying a weapon in the Kings presence. The ao ngan, is performed by raising the right hand forward at about 450 from the body, with the fingers close together, then move the hand up and down quickly from the wrist up. When the hand returns to the original level, turn the palm up to receive the presentation. If the award is small in size, take it with the right hand alone, the left band being kept close to the body. If the award is big, receive it with both hands by raising the left hand almost at the same time with the right hand, except that the left hand needs not perform the ao ngan.
Things to be presented to His Majesty the King must always be placed on raised trays, except for things that are too big or unsuitable to be placed on a tray. If the gifts are to be presented to several members of the Royal Family, they must be placed on separate trays. The raised trays may be lined or covered with cloth, usually silk, satin or lace. When the presenter’s name is announced, the person must rise and hold the tray at waist level, make a bow or curtsy, then walk towards His Majesty and bow or curtsy once more before bending the left knee with the right knee raised.
Then lean forward to present the gift by holding the stem of the tray. After His Majesty has accepted the gift, stand up and retreat one step, then bow or curtsy. Take three more steps backward and bow or curtsy once more before returning to the seat. Bow or curtsy another time before sitting down.
Dress code should be in accordance with that issued by the Bureau of the Royal Household with regards to the occasions and the ceremonies. Black or black and white should not be worn except at funeral-related ceremonies. Proper Royal Decorations must be worn at formal functions. Do not wear dark glasses, smoke cigarette, chat, make loud noises, or do anything considered to be impolite while in His Majesty’s presence. Each time HisMajesty leaves his seat to perform the royal activities in the ceremony, the audience must rise and bow or curtsy.
Respect should be paid to places as well, especially places of worship or palaces. Revealing dresses, shorts, or sandals are not allowed and considered improper in these places. Shoes must be removed before entering a temple. Normally a guest would remove his/her shoes before entering the inside of a house. 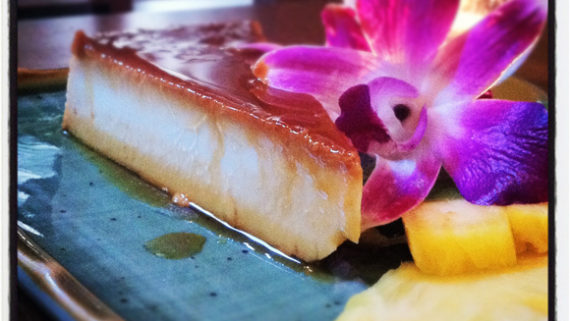 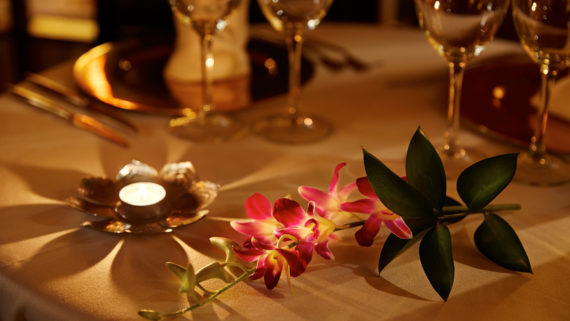 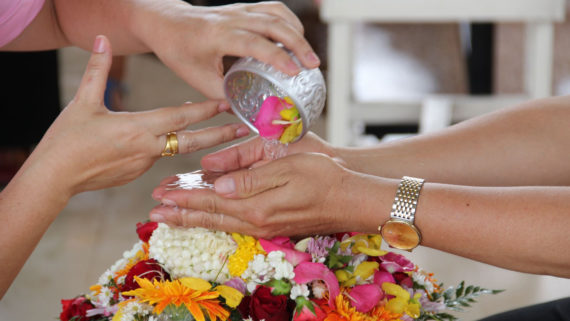 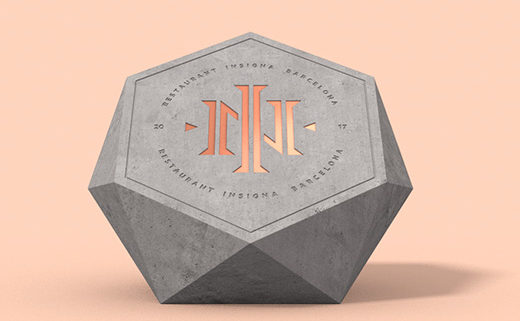